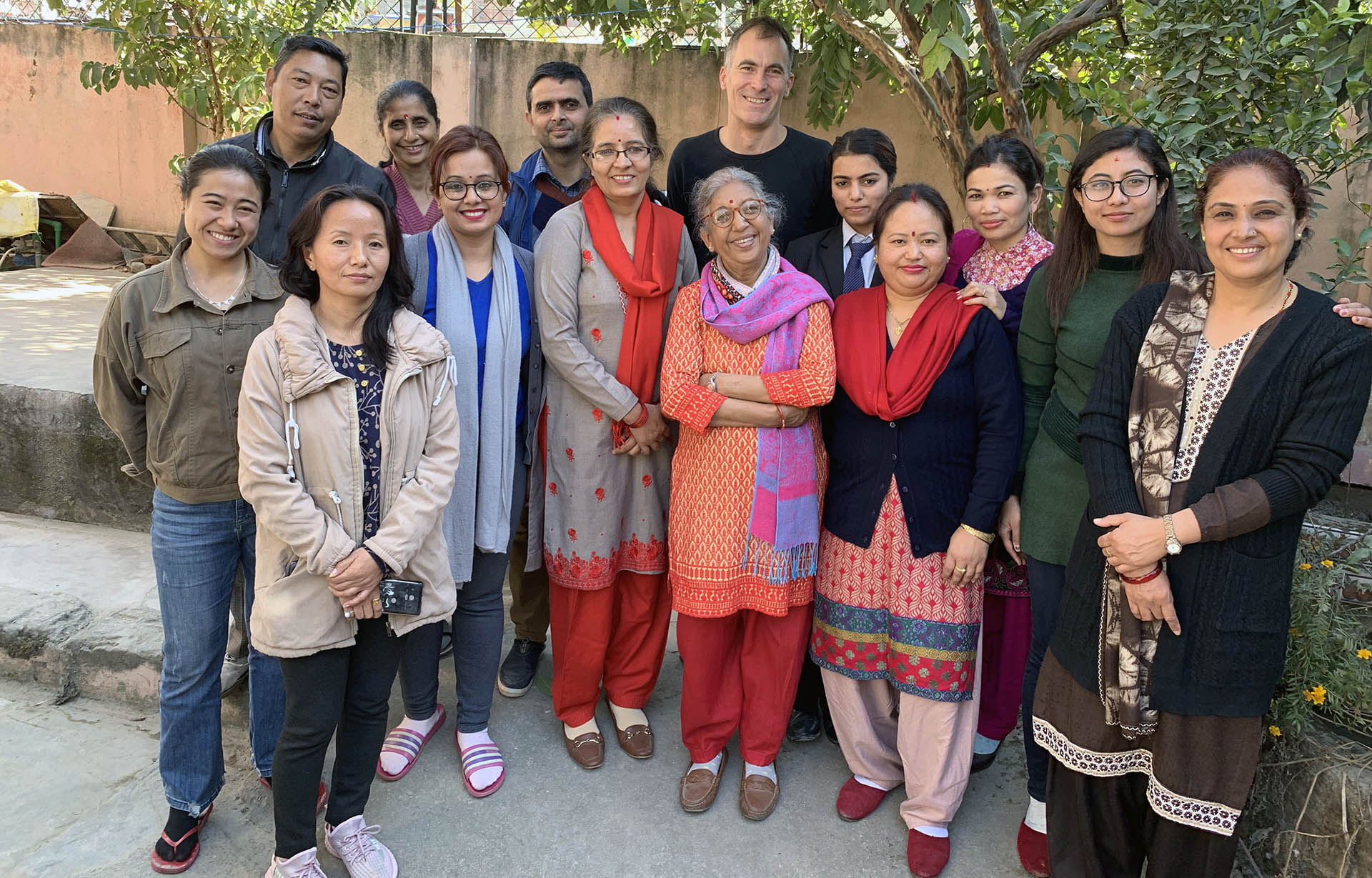 Trevor Patzer is co-founder of the Little Sisters Fund, Inc. He continues to work as our full-time Executive Director and Secretary. He has received multiple honors for his work with the Fund.

Prior to launching the Little Sisters Fund, Trevor managed 5-star spa projects in Bhutan and the Maldives. He began his professional career at Andersen Consulting and worked for the teacher placement agency Carney Sandoe & Associates.  Trevor also spent two years in admissions at Episcopal High School in Alexandria, VA.

Trevor loves the outdoors and is at home in any mountain range, from the Himalayas to the Rockies. He is also passionate about travel and experiencing new cultures. Trevor speaks French, has a working knowledge of Spanish, and has basic abilities in Nepali and Hindi.

Above all, Trevor is a family man. He is very happily married and is a very proud father.

Born and raised in Sun Valley, Idaho, Trevor holds a Masters in Educational Administration from the University of Virginia and is a graduate of Brown University and of St. Paul’s School.

Usha oversees all the Little Sisters Fund activities in Nepal, as carried out by Education for Empowerment Program, which operates LSF programs on the ground in Nepal.

Prior to her role with the Fund, Usha led Nepalese in-country efforts as a Senior Program Officer for Save the Children (UK) on topics including education, marginalized children, discrimination against women, and HIV/AIDS awareness. She also served as Program Officer for The Asia Foundation in Nepal, focusing on Nepalese societal well-being.

In Nepal, Little Sisters Fund works as Education for Empowerment Program (E4E) under the aegis of the Nepal registered non-profit organization, Center for Democracy and Development (CDD).

Ramesh started working as a volunteer for the Education for Empowerment Program shortly after it was started in 1999 and continued volunteering until 2002, when he became the first full-time employee. As a result, he knows the program inside and out. Ramesh serves as Finance Officer and oversees all money matters in Nepal, but beyond that, he is integrally involved in making sure that the program is efficient, effective, and making a transformative impact in the lives of the “Little Sisters”.

Before joining Little Sisters Fund and E4E, Ramesh worked in a Hospital and Rehabilitation Centre for Disabled Children (HRDC), as an orthopedic technician. Ramesh also worked briefly for the Disabled Relief Fund (DRF) as an orthopedic technician, where he made orthoses and prostheses and conducted mobile health camps. In his free time, Ramesh continues to design and produce orthoses and prostheses for people with injuries and disabilities. He holds a B.A. in Economics and has received trainings in finance and management.

Yashoda serves as Program Officer for the Education for Empowerment Program, ensuring the smooth day-to-day operations that support 2,000+ girls in more than 80 partner schools in 20 districts. Along with Usha and Ramesh, she is also a member of the Financial Oversight Committee.

Yashoda was born in Tanahu, a remote western district of Nepal. She got married at the age of 16 when she was in grade 10 and gave birth to her first child when she was 17, but never quit her studies. She earned a Bachelor of Arts degree in 1993, Bachelor in Education in 1996 and Masters of Arts degree in Nepali from Tribhuvan University in 1997.

Trimuna joined the Education for Empowerment Program in 2009 as Health and Program Assistant. She promotes nutrition, healthy habits, and good hygiene with all Little Sisters focusing on preventive measures to keep little sisters healthy. She coordinates the Preventive Health Care Program and oversees twice yearly de-worming and multi-vitamin distribution to all Little Sisters. Trimuna also administers vaccinations as needed. She keeps health records for all Little Sisters and oversees hospital visits as necessary. She is also involved in all areas of E4E programming.

She completed her Pharmacy Diploma in 2008 and recently completed her Bachelor’s degree in Education majoring Public and Physical Health.

Sangita joined Little Sisters Fund as the Primary Educators’ Trainer in 2013. She spent her first months on the job developing the courses and evaluation strategy for PET program. She is now engaged full-time in training the basic-level (Grades 1-8) teachers. She is one of the few female teacher trainers in Nepal.

Before joining LSF’s teacher trainer program, Sangita worked as a Facilitator in building the manner of children in Dhaulagiri National School, Dhapasi. She has three years of teaching experience and has also completed Montessori training. She also worked for four years as an Administrative Officer in Transport and Labor Management Office. She earned her Master’s degree in Economics from Tribhuvan University in 2012.

Neeti is the Education for Empowerment program’s Alumni Coordinator.  In addition to keeping track of all alumni records, Neeti organizes events that bring together the Little Sister alumni, helping us stay in touch with the Little Sisters long after they graduate from high school.

Prior to joining E4E in August 2017, Neeti worked for almost eight years as an Assistant Director of the Social Welfare Council in Nepal, a quasi-governmental organization that monitors, inspects, and evaluates the work of all NGOs and INGOs in Nepal. She also worked for four years teaching English at Oasis Academy, and was the Assistant Secretary at the Lokta Protection and Management Center for five years.

Neeti was born in a remote village of Dolkha district of Nepal where there was no access to schools or basic health facilities. When she was six years old, her family moved to Kathmandu, where she attended school. Today, Neeti has a master’s degree in English from Tribhuvan University and a bachelor’s degree from Pashupati Multiple Campus.

Juni joined the Education for Empowerment Program team in 2008 as an Administration and Program Assistant. Besides assisting in all program work, she is charged with maintaining the E4E Resource Center and Library. Before joining E4E, Juni worked as a teacher from 2004-2007 and with the grassroots NGO, Rural Women Uplifting Association (RWUA) from 2005-2007.

Juni passed her School Leaving Certificate exam in 2002 and her + 2 (grades 11 and 12) in 2007 focusing on English. She is currently pursuing her Bachelor’s degree in Education.

Susmita joined the Education for Empowerment Program as Finance Assistant in 2016. She works closely with Ramesh on bookkeeping and managing E4E’s finances.  Besides assisting diligently with all the financial matters, she also helps in all other program activities as needed.

Prior to joining the E4E team Susmita worked in the Account Division of Orthopedica, a private company that produces orthoses and prosthesis. Susmita is pursuing her MBM (Masters in Business Management) from Tribhuvan University. She completed her Bachelor degree in 2013.

Lama, as he is affectionately known by the Education for Empowerment Program Team, navigates the chaotic streets of Kathmandu and the dangerous mountain passes of the Himalayan foothills to get E4E and LSF staff and supplies to the girls who need them the most. We quite literally trust him with our lives!

Prior to joining the E4E team in 2009, Lama worked for KIA Motors in Kathmandu. In addition to driving, Lama runs office errands as needed.

Indira helped E4E as a volunteer from 1998 to 2008 before joining the team full-time as Parent Liaison in 2008. She does the “heavy lifting” of communicating with parents and answering all of their questions. Parents of Little Sisters trust Indira and appreciate communicating with her because her background is similar to theirs. She also manages our inventory of supplies (backpacks, books, notepads, pencils, pens, etc.) for all 2,000+ Little Sisters and the Post Office Box, which is critical for the 200+ Little Sisters who send monthly letters to their sponsors.

Indira got married at young age so she could not complete her education. After raising her 4 children she went back to school and completed her studies through the 10th Grade.

Januka, as she is known, helps in office cleaning and preparing healthy lunches for staffs, guests, and School Coordinators not only during the office days but also on extensive Letter Writing days.  Everyone appreciates her tasty cooking, honesty and hard work!

Prior to joining the E4E team in 2014, Januka worked for Saathi, an NGO in Nepal as Kitchen Helper.  Before that she was a Tempo (auto-rickshaw) driver and drove that for more than two years in Kathmandu.

Coordinating Mentors (CMs) are graduated Little Sisters who choose to mentor and monitor progress for groups of 30-90 or more younger Little Sisters in E4E partner schools. CMs play a critical role in E4E work, checking in with each girl regarding her academic performance, home and family situation, and general well-being. In areas where we do not have any graduates, we rely on local women, typically social workers or NGO employees, whom we call Contact Persons (CPs). Together, Coordinating Mentors and Contact Persons are our “foot soldiers”, the eyes and ears (and arms and legs) of what we do on a daily basis.  It is only thanks to their hard work and caring that a small permanent staff in Kathmandu can so effectively oversee the education of over 2,000+ Little Sisters throughout Nepal. 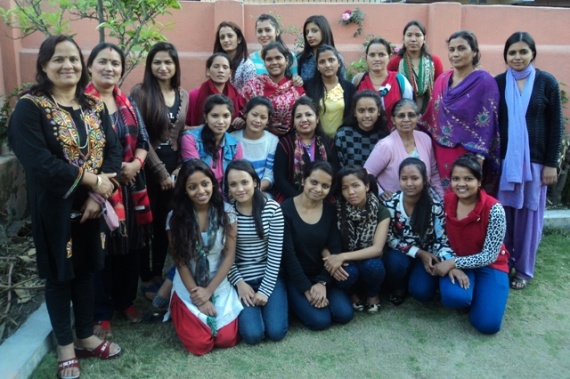 Amy joined Little Sisters Fund in 2020. Amy has over 20 years of experience in non-profit marketing and management. She has worked as a small business development consultant, an educational mentoring and tutoring coordinator, and as a marketing specialist for a rural healthcare system. She brings a thorough understanding of content marketing, graphic design, policy development, business planning and analytics as well as a passion for increasing education and decreasing poverty.

Amy lives in Columbia, Missouri with her husband and two daughters. She is active in community organizations and enjoys reading and supporting her children in their many activities. Amy has a B.A. in International Business from Cornell College.

Education for Empowerment Program is governed by boards of directors in both the USA and Nepal.  In Nepal, Little Sisters Fund works as Education for Empowerment Program (E4E) under the aegis of the Nepal registered non-profit organization, Center for Democracy and Development (CDD).  Both organizations are governed by boards of directors.

Center for Democracy and Development Board of Directors